On a Book: Maximum Ride – The Angel Experiment 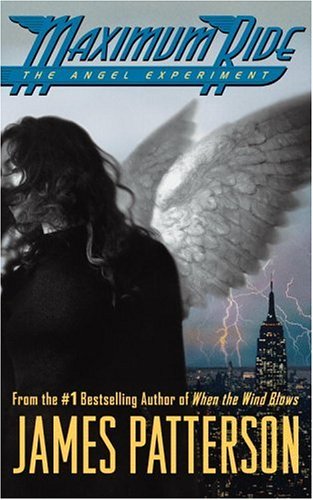 James Patterson is a master storyteller. He has a great ability to develop intrigue and anticipation via a cinematic approach and a building plot. His utilization of small chapters that jump between multiple characters and settings is very effective.

However, James Patterson is not a master wordsmith. Even with interesting stories, I tend to find his writing somewhat elementary. In his books for the adult market, I can manage because the plot is engaging enough for me to disregard the language, but in Maximum Ride: The Angel Experiment, Patterson’s dumbing down of his already basic language made the text almost impossible for me to get through.

I actually purchased this book years ago when it was originally released in 2004. I was a huge fan of When the Wind Blows and The Lake House so when I saw a Patterson book with a winged girl on the cover and “Maximum” in the title (the name of a main character in the former books), I immediately assumed it was the third of the series and bought it without question. It wasn’t until I got home and started reading it that I realized it was merely Patterson’s first attempt at entering the young adult book market using characters and concepts he developed for the earlier books. At the time, I was so disappointed that I shut the book and stuffed it on a shelf.

In 2009, I picked it up again. This time I failed to complete the book because of the language. I managed to come to terms with it being a new series, but the colloquial language and the stereotypical “teen” ramblings was at the time impossible for me to deal with. As such, the book was closed again and stored on the shelf.

Recently, I’ve been on another young adult fiction kick and I decided that I would get through the book, come hell or high water. As of last night, I have fulfilled my goal.

My take on it. It was alright. Unlike the other Patterson works I have read (which is a small sample, granted) I found this one not nearly as developed. Many things involving the history of the characters and the company were nonexistent. I felt many times that I was filling in those gaps from the information I garnered from When the Wind Blows and The Lake House, but to young readers who haven’t read them, I could see there being a wealth of unanswered questions once the book is finished.

Also, Patterson attempted to create a very telling and revealing climactic conclusion to this first book, but I found the entire ending lackluster, with a measly chase and a brief fight.I wanted, and was hoping for more, but felt disappointed once I’d read the final page. Perhaps the story advances drastically in book 2, but I’m unsure if I want to spend another seven years reading another book in this series.

This is definitely not one of Patterson’s shining pieces of work.

On a Book: I Am Number Four by Pittacus Lore

Tell me if this sounds familiar: An alien with supernatural abilities (but looks human) is sent to Earth following the violent conquering of his home planet. The intention of his seclusion is for him to grow up and develop until he’s ready to return to his home planet and save it from the enemy.

While on Earth, he ventures to a small town and attempts to integrate unnoticed into the local high school scene. As he tries to stay under the radar, he falls in love with a beautiful, quasi-popular girl, and attempts to keep his alien nature secret; however, when the beautiful girl is put in danger, the alien reveals his identity thus sending him and everyone he knows into a disastrous web of danger, secrecy and intrigue. Throw in a monstrous enemy (also alien), a quarterback, son-of-the-sheriff ex-boyfriend who dislikes the protagonist, and a nerdy outsider.

So does it remind you of anything? If not, you may have found the story more entertaining and interesting than I did. But if it does, you probably realized, as I did, that the story and the characters are almost a direct retelling of the early 2000’s WB sci-fi drama Roswell.

The lack of originality aside, the plot was extremely predictable and the characters were underdeveloped. Having knowledge of the film that was already well into production at the release of the novel, I developed a sense that the book was an afterthought, a ploy by the authors to cash in on the popularity of the young adult fiction category and pull in additional profits. This is probably a strong contributor to the less than stellar writing.

The screenwriter backgrounds of the authors probably didn’t help the novel much either. There was a lack of description throughout the novel and a dependency on dialogue that made the world a little stagnant and difficult to visualize.

All of this coupled with the quasi-mystical, yet unexplained spell/charm that has been placed on all of the Nine, and you are left with a less than gratifying story.

On top of that, the overt political message of conservation and shifting behaviors on environmental practices on Earth also became somewhat preachy at times. In the story, Henri tells John Smith (the protagonist) that the planet of Lorien experienced the repricussions of a similar path that Earth was currently taking. That eventually the planet was on the brink of self-destruction and that the entire race has to shift their actions to bring the planet back to life. As a result, the Legacies (powers the aliens have) were the gifts the planet provided the Lorien race. I liked the idea of adding some semblance of political messaging in a young adult novel, but I wish it was integrated in a more seamless way rather than being so obvious.

On a positive note, the book was a quick read and entertaining, but it definitely fell short on character development and originality. Oddly enough, the dog/chimera Bernie Kosar seemed to be the most well rounded and interesting character, and it was a dog.

Sidenote: There was one final thing that will probably seem minor to most people but really irked me. Before even staring the Prologue, I read on the back flap of the book the “About the Author” which states “Pittacus Lore is Lorien’s ruling Elder. He has been on Earth for the last twelve years, preparing for the war that will decide Earth’s fate. His whereabouts are unknown.” Now, before I even picked up the book I knew that Pittacus Lore was the pen name for the author duo Jobie Hughes and James Frey, and after the “About the Author” I had the expectation that Pittacus Lore would be telling the story of the Lorien Nine through his outside perspective.

However, if it is from his perspective, why on earth is the story told from a first person perspective of the protagonist? It just didn’t make sense. Why would the Elder, who is a scholar from his home planet, write the tale of the 9 on Earth from the point of view of Number Four? It seems like such a small detail, but if they are going to attempt to create an entire world around the novel, including making the “author” a character for the story, then they should have thought through who would be telling the story.