It is always nice to close out the weekend with a bit of television. And the best thing about Sunday night television is that there is such a variety of shows on. Shows that are captivating dramas, thrilling reality competitions or hilarious dating shows (Thank you, VH1!).

Since the first season of this show, I have wanted to be a part of it. I want to send in that audition video and take my chances in a race around the world. We are now in season 14 and I have yet to send in my tape (I will get to it eventually).

This week the teams were sent off to Romania to perform some gymnastics (their national past-time). Preceding that event, a large number of the teams were held up with flight delays and cancellations due to a thick fog. Now the gymnastics they had to do didn’t seem like the most difficult moves. There were some hilarious moments though when they blurred out the men’s junk when they were wearing the leotards. It is a family show, but they don’t blur it during the Olympics. But if they didnt, it wouldn’t been as hilarious.

Transylvania proved to be quite an interesting place. I would have definitely selected the Vampire Remains road block, and on that subject, I felt so bad for Tammy when she could not convince Victor to re-evaluate their path up the mountain.

And here who was eliminated… 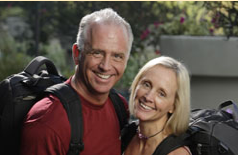 I am really sad they were eliminated. They were one of those old couples that seemed so full of life and happy together. I am going to miss their excitement during the race and their unwavering joy at the experience.

2 hour “movie special” episode! I am not going to lie. This was my most highly anticipated show of the night.

When the show began in 2006, I was unsure if it would be any good. I mean it is a show that is simply about the lives of a huge California family, where is the overlying plot? Where’s the intrigue? But now that I have watched the show since its inception, I am utterly and inconsequentially hooked. The cast is amazing and their chemistry on camera is, in my mind, unprecedented. The twists continue to come and it is always enthralling.

For this week, the promos said that it was going to be an exciting episode. The birth of Kitty and Robert’s adopted child, the death of a family member, they definitely made you want to watch. And boy they didn’t disappoint. To start, the show opens with a pulse-building scene showing one of the Walker’s in V-Fib (ventricular fibrillation, if you don’t know).

Amidst company take overs and gubernatorial candidacy announcements, the birth of Robert and Kitty’s baby was definitely the “upper” in the episode. From car seats to musical selections, it was a lot of fun watching all the family members freak out over the labor.

And oh my God, I cried tonight. It wasn’t even that Robert had a heart attack but the gut-wrenching emotions of the Walker family. Those Walkers can act!

To conclude, Robert lives, Evan Walker is a healthy boy, Tommy Walker has been arrested for embezzlement, and Ryan Lafferty has come to the Walker home.

Oh the truck stop games. This was an inaugural challenge for the Rock of Love show but it was HILARIOUS! Did you guys see Beverly’s face plant into the beer pool?! Or Taya work that stripper pole?! Best quote: “I’m like Scooby and Shaggy…solving a mystery…that girl’s a stripper!”

And during that “Fan Jam” Kelsey went all sorts of crazy. She as a drunken fool crying on a speed bump. Once again…HILARITY!

In the end, Kelsey was the one eliminated and she was sent back to Salt Lake City, UT.

One thought on “On Sunday: Brothers & Sisters, Amazing Race & Rock of Love Bus”